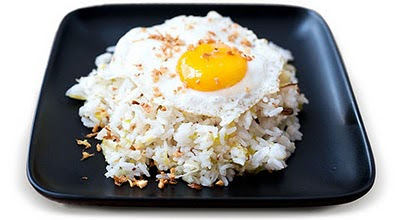 Photo by Evan Sung for The New York Times
Mark Bittman wrote about this recipe last week for the New York Times, and I made it for dinner last night.  Oh man! It is mighty, mighty fine. And it's actually pretty easy- you mix cooked rice with softened leeks and top it with a fried egg, crispy garlic and ginger, and a drizzle of sesame oil. I devoured it. I'm not kidding.  Andy, who loved it too, looked up from his fifth-or-so bite to see me scraping together the last errant grains of rice from my plate.
A couple notes for you:  this recipe calls for day-old rice, but I wanted my fried rice immediately, so I just cooked the rice as soon as I got home, spread it on plate and put it in the fridge until I needed it.  Also! Bittman notes that the original recipe calls for rendered chicken fat instead of the peanut oil he calls for. I didn't have peanut oil at home, and I am all about chicken fat, so when I was at the store I asked the butcher if he had any.  He very thoughtfully pulled the lumps of fat from several whole chickens and gave it to me for free! When I got home, I put the solid fat in a skillet over medium heat and cooked it until it was almost completely liquified.  Then I put the rendered fat in a ramekin to use in place of the oil in the recipe and gave the tiny crunchy gribenes to the dogs.  Everyone was happy : )
Ginger Fried Rice


1. In a large skillet, heat 1/4 cup oil or rendered chicken fat over medium heat. Add garlic and ginger and cook, stirring occasionally, until crisp and brown. With a slotted spoon, transfer to paper towels and salt lightly.

2. Reduce heat under skillet to medium-low and add 2 tablespoons oil and leeks. Cook about 10 minutes, stirring occasionally, until very tender but not browned. Season lightly with salt.

3. Raise heat to medium and add rice. Cook, stirring well, until heated through. Season to taste with salt.

4. In a nonstick skillet, fry eggs in remaining oil, sunny-side-up, until edges are set but yolk is still runny.

5. Divide rice among four dishes. Top each with an egg and drizzle with 1/2 teaspoon sesame oil and 1 teaspoon soy sauce. Sprinkle crisped garlic and ginger over everything and serve.

Posted by arielle clementine at 7:40 PM