Andy and I have just unburdened ourselves of the world's worst camera.  It was a Canon S3IS and it really sucked.  First, it insisted on 4 AA batteries, which would die almost the instant they entered the camera.  And it considered itself too good to recognize rechargeable batteries.  Such a snob.  Worse still, was that every single time you'd take a picture, it would say Memory Card Error, and you'd have to turn it off and back on if you wanted to take another one.

Anyway, don't buy one of those! Instead, we opted for a Panasonic Lumix and took it out to the backyard garden to inaugurate it:

The radish and spinach sprouts are coming up! Broccoli.  It will be roasted one day. 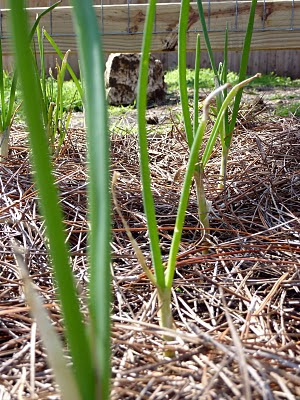 A few of the eight thousand onions I planted.  I really like onions :)
Posted by arielle clementine at 1:47 PM