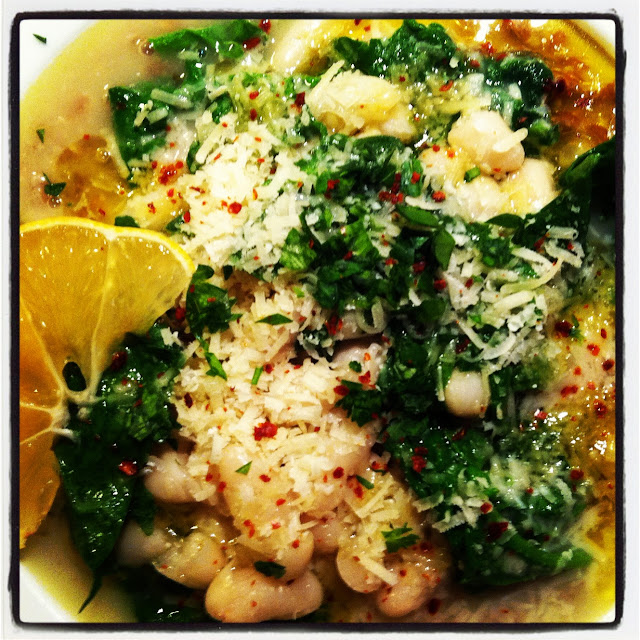 I have always found the notion of a big pot of rosemary-laced white beans rather charming, but every recipe I've tried has fallen flat.  But these beans! They are insane.  In a delicious way. I am in love with them- which sounds weird- but I swear, when I think about this pot of beans, I feel a fondness and a warmth not unlike love.  I think these beans are so amazing for two reasons:  1) The cooking liquid is great- I think a large part of this is owed to the parmesan rind, so do try to include it.  You'll really really want to top the beans with parmesan anyway, so go ahead and buy a small chunk of it that includes the rind, cut that part off, and toss it in the pot.  2) The finished beans are topped with a friendly little mix of things that make them sing: aleppo (a great and not too hot chile flake), parmesan, parsley, sea salt, and lemon (use Meyer lemon if you can get your hands on one).  The combination is just brilliant.  Also- farro is fun! I had never had it before making this recipe, but I'll definitely eat it a lot now- it's like a nuttier version of pasta (Austinites- they sell it in bulk in CM, which is good, because it's a little pricey).  Anyway, I think everyone should make and eat these right away.  They are delicious, and healthy, and will give you a warm love-y twinkle in your eye.

P.S. I got Melissa Clark's Cook This Now for Christmas, and I'm cooking my way through it eagerly.  It really may be one of my favorite cookbooks ever.

Posted by arielle clementine at 10:33 PM