This is the first post in a series about a Science!-themed birthday party. These posts are also being featured on food52! 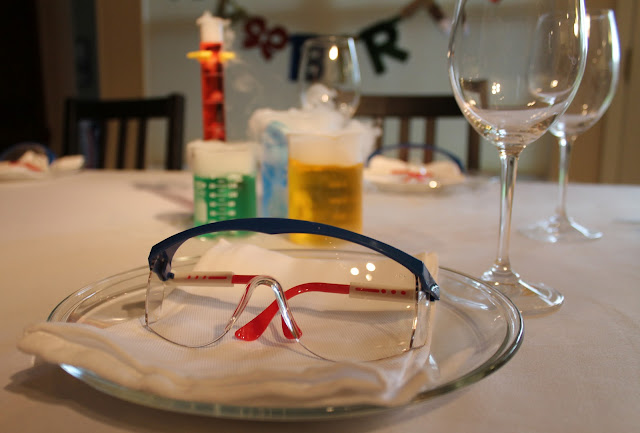 Molly, my best friend since childhood, had been talking for months about throwing her boyfriend, Dustin, a very special surprise 30th birthday party. When Molly and I weren't sprawled on her futon eating nutty bars and watching Ricki Lake in junior high (there's not a lot to do in rural Buda, Texas), I was poring over cookbooks and studying anything remotely related to Martha Stewart. She was my idol. And even though in those days I dreamed of being a high-powered bureaucrat working in the Office of Management and Budget (I don't know why I was so specific about that), I also aspired to be the sort of  über-hostess who greets her guests at the door with a shiny platter of warm gougères. Now I'm 28. I worked in politics fresh out of college and absolutely hated it, but my love of entertaining has remained. And since I never gave up my Martha addiction, and have used every birthday and gift-giving holiday to stockpile more white platters and pieces of cooking equipment, I have a reputation as being the person you go to for help with a menu or tips on planning a dinner party.

So Molly asked for my help planning the party, and I was thrilled to have a big event to daydream about. Dustin loves so many different things, though, that we were having trouble picking a theme: Star Wars? Comics? Video Games? Lord of the Rings? I spent several nights brainstorming ways to make a meal match these themes, but I wasn't coming up with anything great. Much to my husband's dismay, I'm not a Star Wars fan. The only food-related thing I could remember from the movies was a blue milk-type drink. :/ Lord of the Rings has rich food-pairing potential, but we'd been gathering together on Sunday nights for an English-themed meal before watching Downton Abbey, so I feared I'd used up most of my Tolkien-esque material. Then, inspiration struck. Dustin, a biotechnologist, loves all things science. He routinely posts links to various bits of science-geekery on Facebook: pictures of Earth from space, nanotechnology for waterproofing sneakers, etc. What if we made a Science!-themed birthday party, complete with molecular gastronomy techniques, foods in petri dishes and drinks in test tubes?! Yes! We were off and running. 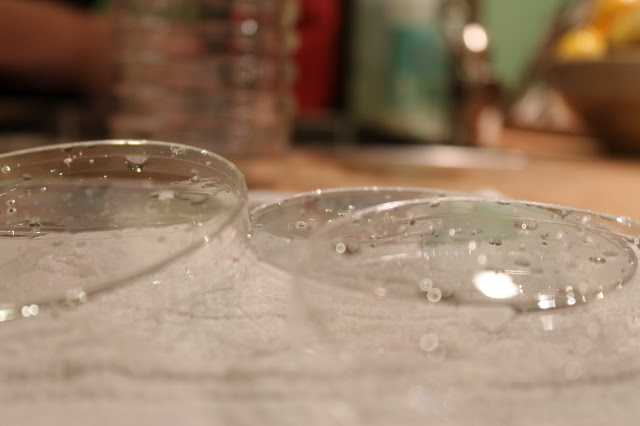 When I was in college, I used to watch the PBS Create channel (cooking shows!!) between classes. On one episode of Made in Spain, José Andrés showed a few fun dishes from his restaurant, Minibar. One dish in particular stuck with me- a caprese skewer where the skewer was a pipette filled with a mozzarella cream that you squeezed into your mouth as you nibbled at the tomato and basil. I was transfixed! The more I learned about restaurants like Alinea and El Bulli, the more I became enthralled with the idea of eating a meal that could so surprise and delight you. Yes, I love simple food, deliciously prepared with the finest ingredients. But there's something so magical about biting into something you think is an olive, only to have it be a spherical packet of intensely-flavored olive juice. It's like being a kid again. Or so I imagined- I have never had the opportunity to eat at a modernist-style restaurant. But thanks to the internet, the chemicals and tips for how to create dishes like this at home are just a few clicks away. I was thrilled at the prospect of getting to try dishes like the ones I'd read about, and even more excited to get to do it all with my friends!

To begin planning the menu, I thought back to the dishes I'd read about or seen on television. We would definitely have a course where a pipette was used as a skewer. And fortuitously, just before we started planning the party, an episode of Top Chef aired with a quickfire challenge about modernist cooking. I remembered three dishes in particular that I thought I could emulate: a dish with powdered olive oil, another with a faux caviar that actually tasted like dill (a technique called spherification), and a Miracle Berry tasting plate (though it sounds like something you'd take at a rave, Miracle Berry is a totally legit pill that makes sour things taste sweet for an hour or two). I had ideas for four courses already! Through random googling, I came across jello shots in petri dishes. But this was a classy party, a gougères-on-shiny-platters-party, so I would make a savory gelée instead- perhaps inspired by an item on the Uchi menu, because I know they often employ savory gelées, and because reading the Uchi menu is akin to studying the Flavor Bible- it's full of inspired combinations of ingredients. So I had plans for a fifth course. And look! Petri dishes and pipettes! This was really starting to sound science-y. 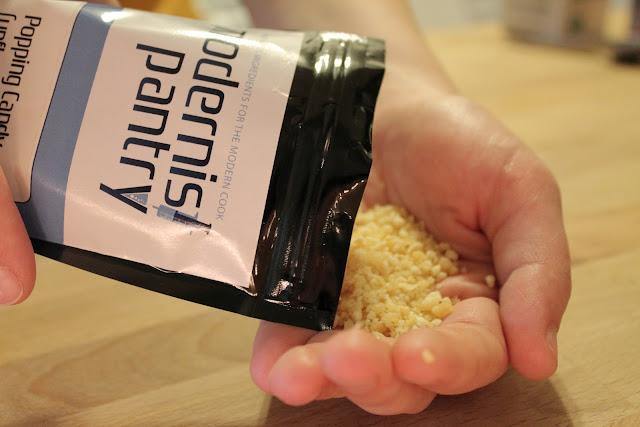 Little by little, the menu began to take shape. A food52 article on Superbowl fare reminded me of Oui, Chef's ridiculously delicious herbed beef skewers- sublime party fare that, along with the horseradish cream, lent themselves perfectly to the pipette course. A very helpful site, http://www.molecularrecipes.com/, yielded ideas for a cheese plate course where I could feature the powdered olive oil and spherified honey, in addition to grapes that had been carbonated with dry ice. Amanda's mention of popped sorghum on the food52 "52" got me thinking about a plate of miniaturized fair foods. And when I was ready to purchase the chemicals for the faux caviar and the powdered olive oil from Modernist Pantry (a great online shop that thankfully allows you to buy these ingredients in small home-cook sized packages, as opposed to the one-pound tubs Amazon was selling), I made a last-minute impulse purchase of some unflavored pop rocks to incorporate into another savory course. Top it off with KelseyTheNaptimeChef's chocolate cake decorated to look like the periodic table, and we had ourselves the start of a seven-course feast! 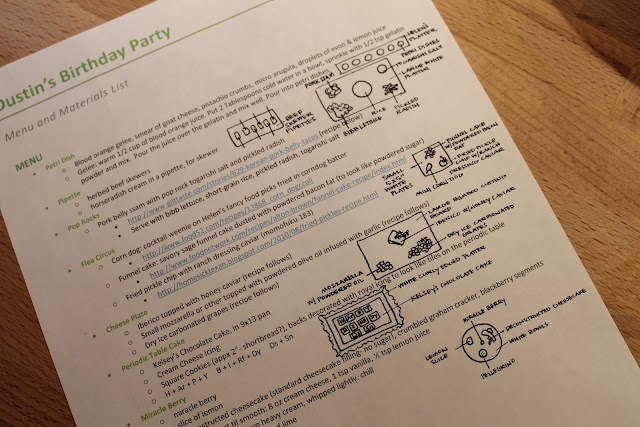 After much, much more tinkering, I finally had a working menu. To help plan, I typed up the menu with links to recipes I'd be using that I hadn't made before. I wrote up a shopping list for items I would need, with sections for the farmers' market and grocery store, including when the items would need to be purchased (for example, the meat I used was purchased at the farmers' market the week before the party because it is sold frozen, so I needed lead time to defrost it). I sketched (and helenthenanny resketched- she's a much tidier artist than me!) pictures of what the courses would look like, so I could get a sense of what equipment I would need to plate each dish, and so I could make sure I had enough serving pieces to make every course look the way I envisioned it. Lastly, I made up a bulleted to-do list for Thursday, Friday, and Saturday (the day of the party), with the bullets listing everything that needed to be done in the order I would need to do it. All this planning really helped me keep cool and stay on task during the hours of prep work. Planning the party was such fun- I can't wait to show you how it turned out!

Stay tuned for future posts about my first attempts to powder-ize and sphere-ify things, all leading up to the Big Feast itself.
Posted by arielle clementine at 10:38 AM